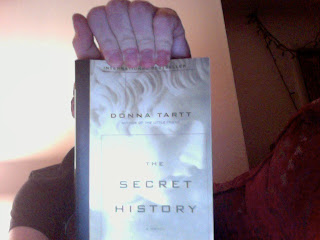 First off, I really do love this book. It is one of those that will always stay fresh in your mind even weeks and months after finishing it. It is a book that actually accomplishes the rare feat of the books quality actually surpassing its importance as a famous book. Donna Tartt” The Secret History is rightfully one of the most well-known famous books from the nineties, and the reasons it still (I hope) eagerly read are based solely on how good it is, and not how famous it is, as is the obvious case with books like On The Road and Everything is Illuminated. It covers similar themes that early Bret Easton Ellis novels cover, but some of those books are now only curiosities of a bygone era, and don’t have the staying power of this book. It is a story narrated by Richard Papen, who is unhappy with his life in California and enrolls in an elite prep school in Vermont. There, he falls into a crowd of classic students who separate themselves from the rest of the student body and who are under the tutelage of the smart, yet hallow Julian. He becomes great friends with these people, all of which have similar problems and remain unaware of Richard’s humble upbringing. Later, as the novel goes on, his dealings with this group he admires endlessly turn darker and darker, eventually leading to murder and betrayal. A lot of the fun in reading this is to see these people become monsters, having started as simply arrogant classics students. It reminded me again of characters from the novel Less Than Zero, how their personalities are so infected with their senses of entitlement, which are bolstered by the morally ambiguous Julian, that they can justify murder, incest, and other morbid acts in their borderline sociopathic minds. This is where the book becomes something more to me in how it dissects the idea of admiration and goes to great lengths to show how that can lead to pure evil. In the character of Julian, it does not really matter to himself or his students that he is really has no personality or recognition of other people around him, they just care that he knows a lot about Greek. I have seen these kind of people, having done some theater work, although none of them were murderous or amoral, but I did see in them a very shallow lifestyle when you looked beyond their talent, and even worse, a striking sense of elitism and disconnect and from those around them who were not part of their group. It really bothered me how people flocked to them like they were unending bastions of knowledge, when they were really phony as all hell. I see that with Julian and many other characters in this modern day version of A Separate Peace, which shows the harsh world of the intellectually elite, and the consequences of associating with those kinds of people in exchange for your identity. It is an engaging and haunting work that is still relevant, and it gets my full recommendation.
Rating: 5/5
Posted by HumbleBookGiant at 9:22 PM