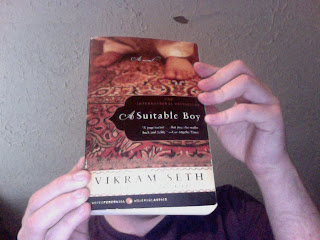 A book that is 1474 pages is everything that you think that it is; it is sometimes a chore to read, takes up a lot of your time, and by the end you question whether you can read another book afterwards, or if there is such a thing as reading, since what you have been doing for the past two weeks has become second nature. But a few, unexpected things that Vikram Seth’s colossal novel A Suitable Boy brings to mind are nuance and intricacy. This is not a long novel in the way of The Stand or War and Peace, in that there is not a lot of real action, and scenes do not go on longer than they need to be. Despite it’s length, which is a selling point of the novel, Seth keeps things very restrained and doesn’t add anything unnecessary, and although a big portion of this novel is quite boring, you become invested in the story pretty quickly, and over the long page count, the characters do become alive. It is a simple story, with its core being Mrs. Rupa Mehra’s search for a suitable mate for her daughter Lata. From that thread, Seth weaves a tale of the trials and tribulations of four extended families dealing with India’s newfound independence over a year in the early 1950’s. The book has many memorable scenes, such as a lion hunt, a bloody riot, two grand weddings that bookend, and enough tension about who Lata is going to marry that, towards the end makes you wish there were at least 100 more pages to go through (because I thought she didn’t choose right). The one area I have issue with is how much time is spent on Indian land reform. It is too complicated, especially with all the minor characters involved, and it just made me more interested in skipping ahead to see what Lata, Maan, or Haresh might be doing. But with a book this long, you have to let some stuff slide. I won’t let too much of the plot slip out, because it’s effects work better as a surprise. This is a really rich, enjoyable book that rewards the reader for sticking with it, despite its arguably obscene page count.