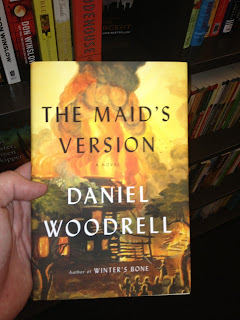 (Note: Sorry about the photo. I checked it out from work, and they keep the dust jacket, so I snapped this picture of another copy we have. It should suffice.)

I am very torn about my feelings toward Daniel Woodrell. I wholeheartedly agree with the consensus of his small fan base that he is one of America’s undiscovered gems, and his prose style is second to none, accomplishing the feat of being both polished and humble in its execution. But I find his stories to be very weak in narrative, like I am looking at fancified skeleton of an incomplete building, to crib a quote from Hemingway. The first novel I read of his, The Death of Sweet Mister, may be in my top ten, and still has the power to devastate even when I am just reminiscing about it. Luckily, his first novel since Winter’s Bone, The Maid’s Version is a close second to Sweet Mister, even more so than Woe To Live On. But it still lacks a cohesive and easy-to-follow story arc, which is an important aspect to my enjoying a novel. The plot tells of a dance hall explosion that happened in 1929 in West Table, Missouri. The facts of the case are skewed, cause we are told it by a man who heard it from his strange grandma, whose sister died in the explosion that killed 42 people. They never learned who did, whether it was mobsters, zealots, or just bad luck. But we do see many versions of what might have happened, like a crazed preacher who was a main suspect who meets a brutal end, or a notorious bank robber who isn’t so notorious who might have a clue as to what might have happened. It is a little hard to follow, since Woodrell loves to decorate with his words, leaving little else as a driving force that can elevate the story. But it is damned pretty to look at, and if that is enough for you to warrant a reading, check out this relatively slim book, or any of Woodrell’s other offerings.
Rating: 4/5
Posted by HumbleBookGiant at 2:41 PM