Review: "On the Edge" by Edward St. Aubyn 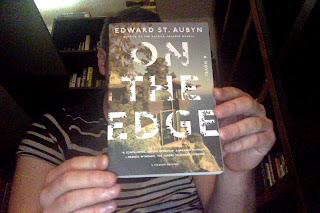 After reading On the Edge, only the second non-Melrose novel I have read written by Edward St. Aubyn, I felt like I had put my foot in my mouth. On my Facebook page, I posted a picture of a new book that contained all five novels, raving about how good they were. I think they are the best books to come out of England in a while, being as well written as any novel I can think of, but telling a deeply affecting story, unadorned with smug self-reflection while being entertaining as hell. I even liked his most recent novel, Lost for Words, a brilliant but harmless satire on the cult of the literary award. But this novel is not only Aubyn’s worst novel, but one of the biggest duds of the year, failing to capture even a sliver of the magic of his Melrose novels, instead, retreading a tired old trend of empty decadence filled with one dimensional characters engaging in shallow behavior. At the center of this story is a man named Peter Thorpe, whose job and relationship have soured and caused him to enter a spiritual crisis. He meets a free-spirited girl named Sabine, and follows her to Big Sur, California, where he immerses himself in the New Age Movement, with varying results. The novel is funny at times, like when Peter stumbles onto a sexual liaison with a transvestite, and one person quotes Derrida, describing an idea like a vagina, “folding into and out of itself.” It is ridiculous in all of the worst ways, and is a huge step down from what I know Aubyn is capable of. It takes the sex scenes from his Melrose novels, which are painful and uncomfortable, and plays them for laughs here, especially during the novels very welcome end. Aubyn is a master, no doubt about it, so I’ll chock this novel to being a mere slip-up in a grand career.
Rating: 2/5
Posted by HumbleBookGiant at 7:55 AM