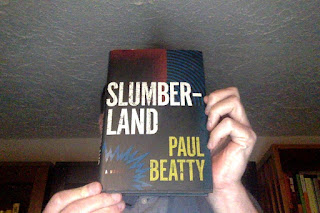 Across four brilliant novels, his third, Slumberland, I just finished this morning, American author Paul Beatty has given his readers one of the most brilliant satirical journeys of our current moment. They feel necessary and relevant while being interesting, thought provoking and pee your pants funny even during their most bleak moments. No topic is safe, whether that be race relations, pop culture, both prominent and forgotten or our relationships with one another, it all gets skewed by Beatty’s musical wit that can be as harsh as a snare drum but as soft as the notes on a grand piano. His narrators, black men wise beyond their years with deep rivulets of knowledge about esoteric topics that instead of being better off for being smart, are instead harangued by it and the absurdity of what they experience, crumbling under the weight of their awareness that the world can be a better place if only people listened to them. And all of this is conveyed with the most musical of prose filled with double entrendes, crass jokes and impressively deep references to our country’s rich cultural history, mindful of its darker parts and most of the time, its most embarrassing. The man at the center of this novel is Ferguson Sowell, aka DJ Darky, a skilled DJ who belongs to possibly the only group of musically talented people who treat the art of DJing with such love and respect. He describes himself as having a phonographic memory, where he remembers everything he has ever heard, from the crack of his broken arm as a little boy and the sound of Norma Desmond’s dress as it descends the stairs in Sunset Blvd. The thing he seeks most in life is the perfect beat, the perfect collections of sound that would symbolize a kind of rhythmic nirvana. He thinks he has found the path toward this in the music of Charles Stone, aka, The Schwa, whose music he first hears as the soundtrack to a porno film where a man is doing unspeakable things to a live chicken. His search for The Schwa takes him to Berlin on the eve of the fall of The Berlin Wall. There, he takes a job as a jukebox Sommelier (crafting the perfect collection of music for a jukebox) at the Slumberland nightclub, a place where blacks in Berlin go to be ogled and pursued by white women. He soon ingratiates himself in a small group that includes a woman Klaudia, his future love interest and her sister Fatima as well as Doris, who works at Slumberland and the Schwa himself, whose true purpose will be recognizable to anyone whose read a Beatty book before. All this leads to some very funny and very gut wrenching scenes, like the cruel fate of Fatima as well as the climax, where a large, anarchic concert brings with it the fruits of everyone’s labor, even if they do not want them anymore. There is not a weak link in any of Paul Beatty’s books, and this cruel, hilarious journey through the modern collective consciousness is no different.
Rating: 5/5
Posted by HumbleBookGiant at 4:25 PM